Peter Wright versus Dimitri Van den Bergh – master versus apprentice. Van den Bergh credited Wright’s influence following his Matchplay triumph last year, having stayed at Chez Snakebite during lockdown, and now he takes on his darting mentor as he bids to retain his crown.

The Belgian is aiming to become the fourth man in Matchplay history to successfully defend his title, yet he faces an unenviable task against Wright, who posted the highest semi-final average [110.37] ever seen at the Winter Gardens to dispatch Michael van Gerwen on Saturday.

The Scot produced arguably the greatest performance of his career to account for the two-time Matchplay champion; firing in 12 maximums, converting three ton-plus finishes, and missing double 12 for a magical nine-darter.

He also finished with the seventh-highest average in the tournament’s history, although Van den Bergh will relish the opportunity to extend his unbeaten Matchplay record to 10 games, having already dumped out world No 1 Gerwyn Price earlier in the event.

The excitement is tangible ahead of Sunday’s showpiece, and Sky Sports Darts’ Wayne Mardle is expecting a titanic tussle at the Empress Ballroom.

“I think it is going to be close because Dimitri is going nowhere. He has got the game to match Peter with his 180s and 140s. He has got the belief. I am a little bit excited. I need to calm down!

“I think we’re in for an absolute pearler, I really do. I am kind of running it through my mind. They will both play well. We talk about timing a lot. I think it is going to be all about that.”

History beckons for both men

What an incredible story. Just over 12 months ago, the pair were housemates – now they’re locking horns in a televised final for one of the sport’s biggest prizes.

Van den Bergh could become the first man to lift the World Matchplay title in two different venues, while Wright – a runner-up in 2017 – is desperate to add the Phil Taylor Trophy to his haul.

The colourful Scot bullishly insisted pre-tournament that he would win this year’s World Matchplay, but he’s backed up those claims thus far with a series of stellar displays.

Wright’s route to the final

He relinquished just 14 legs in disposing of Danny Noppert, Joe Cullen and Michael Smith, and his inspired display against Van Gerwen will forever be etched into Winter Gardens folklore.

Having eased past Devon Petersen in his opener, Van den Bergh came through a thrilling clash against Dave Chisnall before sweeping aside Price. He then produced a stunning comeback to thwart Krzysztof Ratajski, winning 15 of the last 18 legs.

Snakebite dominates the pair’s head-to-head record, having won nine and lost just two of their 12 meetings, following a stalemate in the opening phase of this year’s Premier League.

Wright defied a 106 average from ‘The Dream Maker’ to prevail 8-5 in their last meeting – also in the Premier League – in May, and given Van den Bergh’s respect for the world No 2, the former world champ may hold the psychological edge. 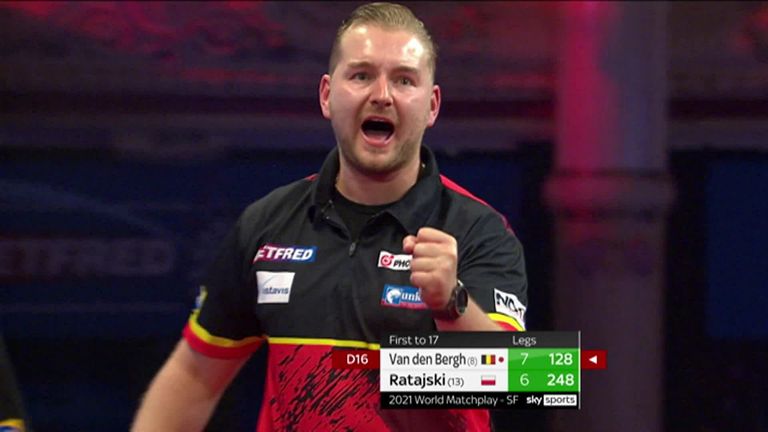 “I give 100 per cent my best, I am focused and I want to be an example – not only for my younger brothers, but also for everybody else that is a young talent.

“I’ve been accepted by the whole family as their adopted son. I’ve learned a lot from Peter Wright.

“Everybody knows I have stayed with him for three months, he took care of me for three months and then all of a sudden, I get to the World Matchplay on my debut and I manage to win it.

“There are only three players before me that defended their title. I might be the fourth one, but I’ll be the first from Belgium. Maybe dreams will come true.”

Wright: He has got to play the master! “Dimi is a fantastic guy. He has grown into a man now. He has learned a lot, not just from staying at mine. He already had a talent there anyway. You’re not double World Youth champion for no reason at all.

“Before that, we used to play in Barnsley and he would get distraught about why he lost games. He would come and talk to me and I used to just feed him positive stuff and the next day, he would get to the semi-finals of the Players Championships. I just helped him out that sort of way.

“He has got an awesome record [at the Matchplay] but he has got to play the master! I have already dreamt of it [lifting the trophy]. I am already in my outfit, I’ve already seen it, so I am picking it up.

“It will be two sportsmen battling it out, smashing each other to bits, loads of 180s. I reckon we should be able to do the nine [darter] between us.” Wayne Mardle: “It is so good to see Peter playing the darts we know he can. He said he was going to win it, and finally I believe him!

John Part: “Dimitri is going to feel good, but I have to imagine he has watched that performance and he is thinking: ‘Ooh, I think I have that in me’. I don’t know if you’ll think: ‘I know I have it in me to beat that, because that is an impressive display that we witnessed.

“Dimitri is going to dictate the pace, I think. I think he will try and control it and I think Peter enjoyed the quick pace way too much tonight. Michael had no other option but to play that game, whereas Dimitri does.”

Watch the World Matchplay Final from the iconic Winter Gardens on Sunday night. Check out daily Darts news on skysports.com/darts, our app for mobile devices and our Twitter account @skysportsdarts