By Paul Prenderville at the Winter Gardens, Blackpool 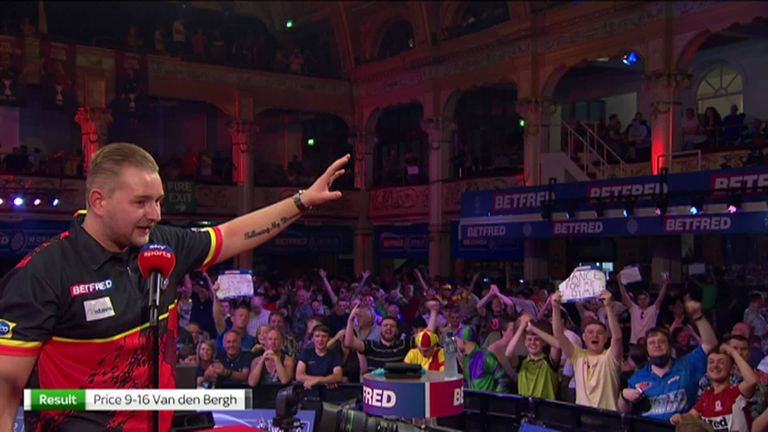 Dimitri Van den Bergh said Gerwyn Price’s mental games of mocking his dance made him smile and didn’t prevent him from beating the world number one.

Dimitri Van den Bergh said Gerwyn Price’s mental games of mocking his dance made him smile and didn’t prevent him from beating the world number one.

Dimitri Van den Bergh remained on course to defend his World Matchplay title as a superb performance produced a 16-9 victory over world No 1 Gerwyn Price at the Winter Gardens in Blackpool.

Star billing on a sell-out night at the Empress Ballroom went to the clash between the world no 1 and world champion Price against the reigning Matchplay champion Van den Bergh.

In a contest that featured 16 maximum 180s and a string of high-quality exchanges, it was Van den Bergh who kept his hopes alive of becoming just the fourth man to retain the crown in this tournament with a spectacular burst that saw him win seven of the last eight legs for victory.

He will next face Krzysztof Ratajski who saw off 23-year-old Callan Rydz. Despite some wayward doubling – he missed 30 darts at the outer ring – Ratajski’s scoring was too powerful as the Rydz fairytale was halted and the 44-year-old from Poland progressed. 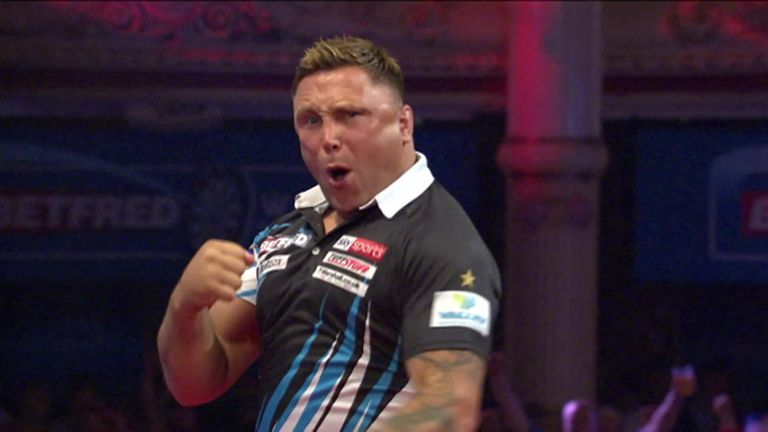 Dimitri Van den Bergh was in superb form to extend his unbeaten World Matchplay record to eight games as he powered past Gerwyn Price to remain on course to defend the title.

The brilliant Belgian won on his debut in Milton Keynes last year when the tournament was played behind closed doors, and with the competition back at its iconic home on the Lancashire coast, he has carried on where he left out.

Van den Bergh averaged 102.27 and hit 10 maximum 180s on his way to the last four, and while both men missed more than 50 darts at double between then, The Dreammaker’s power-scoring kept him in the ascendency.

In sweltering heat on the Blackpool stage, and after Price had opened with a 105 finish, Van den Bergh took out 96 for a 14-dart break of throw but only after the Iceman, beaten in the first round of the Matchplay in each of the last four years, had missed four darts at double himself. 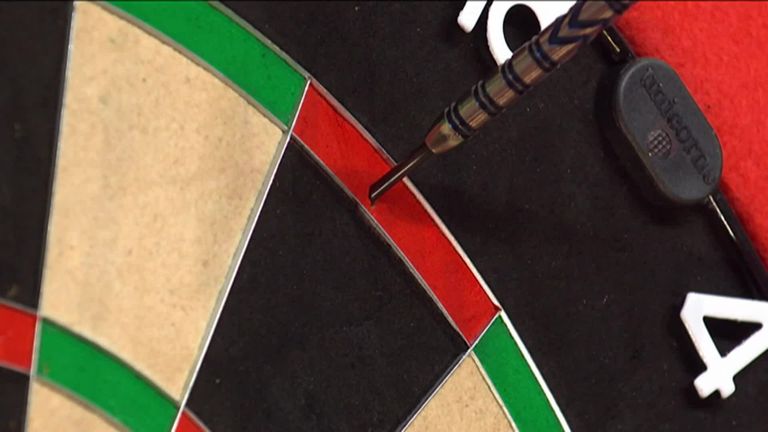 Two more darts took Price’s tally to 10 missed darts at double in the opening six legs and Van den Bergh punished him again. When he landed a second break of throw, he had a three-leg lead.

Having been booed to the stage, Price was digging deep in his search for inspiration and when he finally pinned double top to get a third leg on the board, he played to the gallery with a bellowing roar.

Van den Bergh, at 8-4 in front and halfway to the finishing point, saw a few doubling concerns of his own creep in and when the Welshman claimed the 15th leg, he was within one for the first time since the end of the opening session – and he celebrated with a Van den Bergh style dance. 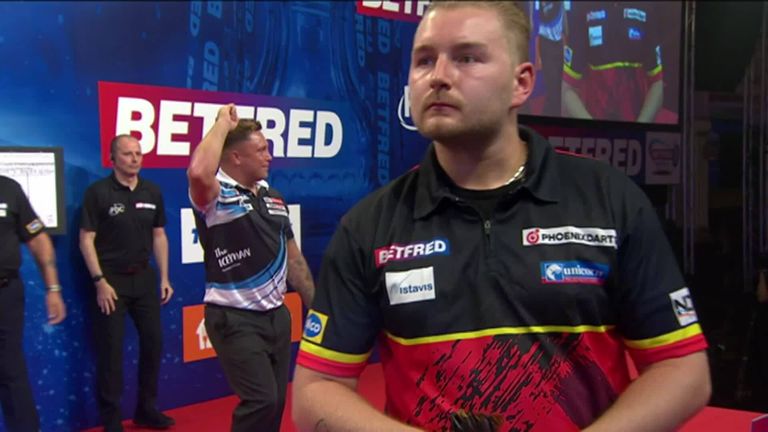 However, with the standard climbing upwards, the pair traded 13-dart legs before Van den Bergh seized control again with three more legs, including two 12-darters that took his average up to 102.

From there, the defending champion was in cruise control, as he extended his lead to six legs with a burst which left him within one of another semi-final. Price managed just one more leg as his missed darts tally crept up to 26 and the Belgian kept his cool to cross the finishing line and celebrate another win on his Matchplay CV.

Krzysztof Ratajski ended his quarter-final hoodoo to beat Callan Rydz and reach his first major televised semi-final after a 16-8 victory over the young debutant.

Ratajski had been beaten in four previous televised quarter-finals including the World Championship, UK Open and last year’s Matchplay but he was too good for the world No 54. 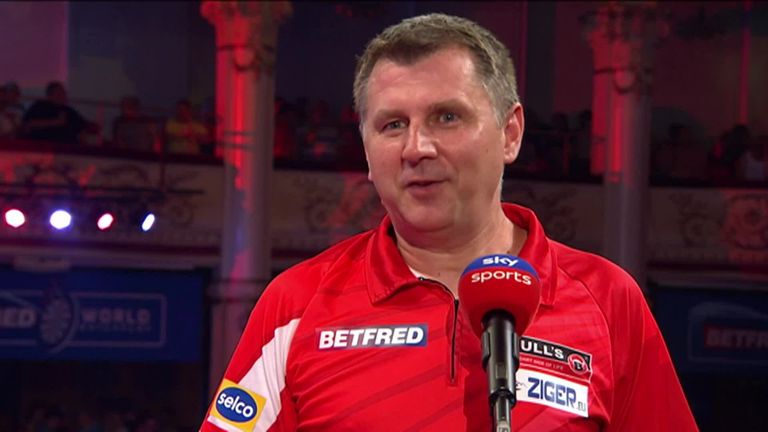 Krzysztof Ratajski said he’s over the moon to reach his first major semi-final in the PDC, after defeating Callan Rydz 16-8

Krzysztof Ratajski said he’s over the moon to reach his first major semi-final in the PDC, after defeating Callan Rydz 16-8

Rydz’s memorable run had accounted for three-time world champion Glen Durrant in the first round and the 2019 Matchplay winner Rob Cross amid an astonishing display of bullseye hitting in the second round.

Ratajski missed three chances to break early on in the opener, allowing Rydz to step in and claim the first leg but Ratajski – as is his way – was unfazed and fired in the first 180 of the contest on his way to a 2-1 lead with a 12-dart break of throw. 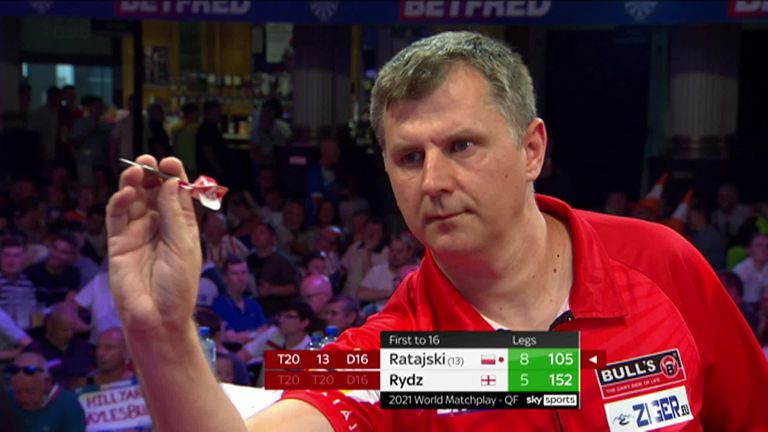 Ratajski, a seven-time winner on the Pro and European Tour over the last three years, won four of the next five legs to take a firm grip of the contest – a classy 116 finish the highlight as missed doubles went unpunished by Rydz, who was not scoring enough to challenge the 44-year-old from Warsaw.

With a four-leg lead behind him, Ratajski was rock solid on his own throw, adding a second three-figure finish to extend his advantage to five and it was not until the 18th leg of the contest that Rydz finally broke through. 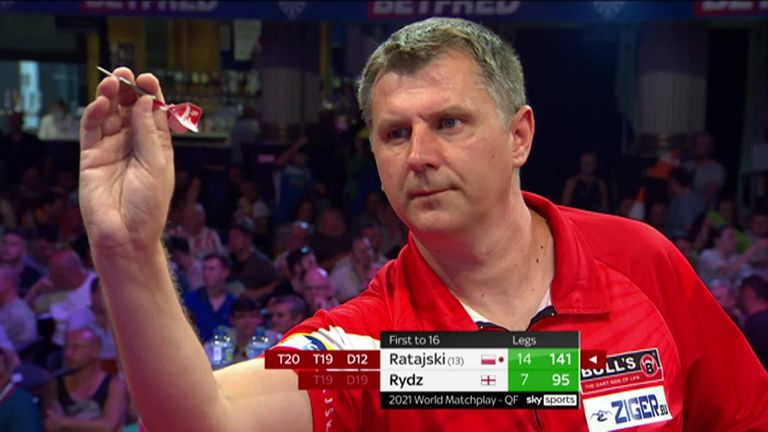 Having been broken four times himself, the Geordie managed to pin 41 for a 13-dart break of throw but that only reduced the arrears to six and the unflappable Ratajski hit straight back for a 13th leg of the match that left him within three of the finishing line.

An 11-dart break of throw, followed by a 141 finish looked like taking Ratajski into the semi-finals in style, and while Rydz pinched the next leg, it was Ratajski who pinned double eight to seal his date with Van den Bergh.

Watch the World Matchplay from the iconic Winter Gardens all the way through until Sunday, July 25. Check out daily Darts news on skysports.com/darts, our app for mobile devices and our Twitter account @skysportsdarts