By Paul Prenderville at The Copper Box

Defending champions Manchester Thunder finished their season on a high with a 43-34 win over Leeds Rhinos to claim third place on finals weekend at the Copper Box.

Ahead of Sunday’s Grand Final, the Roses rivals went head to head 24 hours after their own championship hopes were ended by semi-final defeats.

The two served up a cracker to start the day’s action, but it was Thunder who emerged victorious while Rhinos can take enormous credit from making the season finale in their debut campaign.

For Thunder director of netball Karen Greig, semi-final defeat still rankled but her team delivered a rousing finish to the defence of their title – led by Kerry Almond who claimed Player of the Match honours just a few months on from coming out of retirement.

“I couldn’t have asked for much more from my players or my coaching team; everyone has given 110 per cent,” Greig told Sky Sports.

“It’s been a difficult year for everybody, on and off the court, so to be able to be here this weekend was fantastic. To be able to go home with a medal, albeit not the colour that we wanted, I’m super proud.”

Rhinos had made an impressive start to Saturday’s semi-final against Loughborough before falling away in the face of relentless Lightning pressure, and they were at it again on Sunday.

The opening quarter went the way of the competition’s newest franchise who forced the early turnover that allowed them to gain the upper hand and forge a narrow one-goal advantage at the end of the opening 12 minutes.

However a brilliant Laura Malcolm intercept at the end of the first quarter ensured it wasn’t two and when the 2019 champions were able to force an early turnover to start the second quarter it set them on their way to a lead that they would not surrender.

Six unanswered goals to start the quarter saw Thunder open up a significant advantage and while Dixon stopped the rot and Rhinos threatened a comeback it was the Lancashire franchise that held a 23-18 lead at half-time. 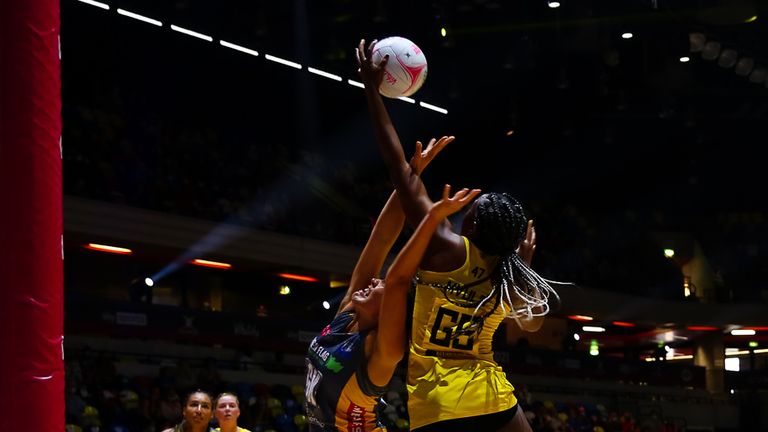 “I couldn’t have asked for anything more from the players and the way that they attacked it.

“We had a really clear game plan that we wanted to roll out today and their effort to put that into practice was unbelievably good!

“We made Thunder earn every single goal that they scored.

Leeds have come back from every challenge they have faced this season, and they ensured the game went into the final quarter on a knife edge. With defences on top, Rhinos chipped away to stand within two goals of Thunder and with the final quarter to come Dan Ryan gathered his team for one last rousing speech.

With the game on the line in their final outing of the season, Thunder showed Championship class to open up with another run of turnover ball to pull clear in the opening stages of the final quarter.

With their narrow advantage becoming seven goals both teams would have been forgiven for easing down but both threw everything into it and the physicality was as intense as it had been all weekend.

However Thunder stood firm in the face of Leeds pressure to end their defence with a victory, albeit not the one they wanted.

Sky Sports is your home of netball. Follow us throughout the Vitality Netball Superleague’s off-season as we bring you all of the latest transfer news and keep you updated with the latest England’s Vitality Roses news.