Hampshire only manage 125-9 at Trent Bridge but Notts Outlaws come up just short after stunning fightback by the visitors despite late onslaught from Matt Carter, with Liam Dawson leading the way with the ball for the Hawks 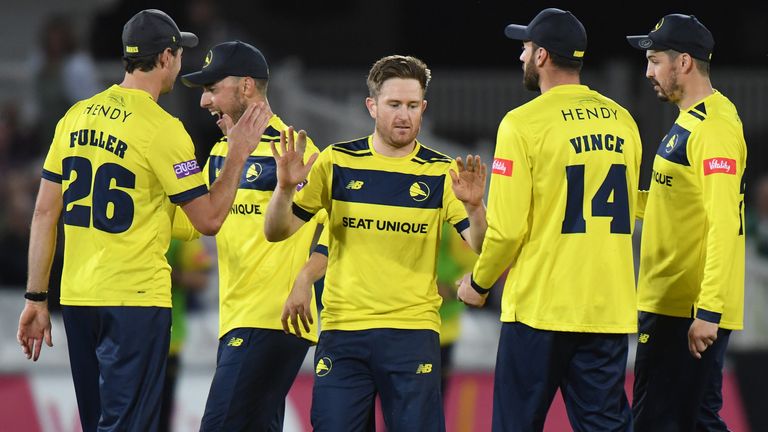 With runs hard to come by on a slow, used wicket at Trent Bridge, the quarter-final contest see-sawed either way as the Outlaws chased a target of just 126 for victory, with Brad Wheal claiming the decisive wicket when he dismissed Dane Paterson off the fourth ball of the final over.

The visitors were put into bat and lost their two-star batsmen early on as D’Arcy Short was caught by Ben Slater off the bowling of Paterson (3-22) for nine and James Vince was caught by Matt Carter off Samit Patel for six.

Calvin Harrison (2-27) then removed Lewis McManus for two and Liam Dawson for a duck off successive balls to leave the Hawks toiling on 40-5.

A 49-run partnership for the sixth wicket between Tom Prest (44) and James Fuller (30) rallied the visitors before the latter fell to Carter (2-18), with Hampshire then managing to scramble their way to 125-9 from their 20 overs.

This total appeared around 20 or 30 runs under par and it certainly looked that way as Alex Hales and Joe Clarke made a flying start as the Outlaws began their reply.

Hales was eventually caught by Vince off Dawson for 19 from 12 balls with the score on 42 in the fourth over, but Ben Duckett continued the hosts’ charge alongside Clarke until he was run out for 16 by a direct hit from Fuller with Tom Moores out for one shortly afterwards.

Notts still looked comfortable at 83-3 when Dawson (3-24) took centre stage with the wickets of Clarke (42 from 37 balls) and Patel (four) from successive balls, with Scott Currie (2-16) then repeating the back-to-back trick thanks to stunning catches in the deep from Short which claimed the wickets of Harrison (five) and home captain Steven Mullaney (four).

That had the Outlaws reeling on 96-8 which then became 109-9 when Wheal (2-24) bowled Luke Fletcher, but there was still a twist in the tale as Carter (23no) smashed two sixes off Chris Wood (1-32) in the penultimate over.

Notts therefore needed only three to win off the final over but Paterson was crucially on strike and he was unable to score off the first three balls of Wheal’s over before edging him behind to McManus, leaving Carter stranded and Hampshire celebrating their first Finals Day appearance since 2017.

But following on from Headingley earlier in the day, there were also hat-trick opportunities after back-to-back wickets…

Hawks captain James Vince: “I’m delighted, to do it in that fashion as well. At halfway we were down, we had a bit of hope but for the boys to come out – even after seven or eight overs the start they got off to it was looking a mile off, but I’m so proud of the lads. An immense effort and hopefully more of the same on Finals Day.”

Player of the Match Liam Dawson: “To come here and perform like that under the pump in a quarter-final is brilliant. The wicket did start to spin a bit more when you bowled slower and luckily we kept taking wickets and in a big game with runs on the board that’s precious and it’s brilliant that we won.”

Outlaws captain Steven Mullaney: “It’s just a little bit raw at the minute. It’s a total we should definitely have chased down and we lost wickets in the middle in clusters. Unfortunately we weren’t good enough but credit to Hampshire they stuck in all the way through and good luck to them on Finals Day.”

It’s down to Taunton on Thursday evening – live on Sky Sports Cricket from 6.55pm – with Somerset hosting Lancashire in the third quarter-final. Will it be another away win or another victory for the south?