After a year-long delay, the Tokyo 2020 Paralympic Games finally commence on Tuesday with the opening ceremony and Tokyo will become the first city to host the Paralympics twice.

Back in 1964, there were just a few hundred athletes and the Paralympic programme consisted of nine sports.

Now, 57 years on, more than 4,400 athletes from 162 delegations, including the Refugee Paralympic Team, have travelled to Japan to compete in 22 sports across 12 days of action.

Of the 227 athletes selected to represent Great Britain and Northern Ireland, there are 43 returning Paralympic champions and 85 debutants.

ParalympicsGB has finished in the top three of the medal table at the previous six Games. At Rio 2016, the team finished second with 147 medals, including 64 golds.

There are 539 medals up for grabs in Tokyo and with a target medal range of 100-140, and Penny Briscoe, ParalympicsGB’s Chef de Mission, is confident her team of athletes, guides, pilots and competition partners can deliver a strong performance.

“The range reflects the fact that it’s been a really disrupted cycle due to the pandemic which is clearly understandable. Athletes have had different experiences in terms of their ability to train and compete,” Briscoe said.

“There were some really strong performances in the limited competitions that we were able to attend and I think that overall, what we’ve seen this cycle indicates a very strong possibility of a successful Games.”

Swimmer Ellie Simmonds and archer John Stubbs have been named as the flagbearers for Great Britain at Tuesday’s Tokyo Paralympic Games opening ceremony.

There will also be a record 100 female athletes competing for ParalympicsGB, including Dame Sarah Storey who is bidding to become Great Britain’s most successful Paralympian, and the youngest athlete, swimmer Ellis Challis, who makes her Games debut at the age of 17.

Ellie Simmonds, one of the flagbearers for the opening ceremony, will be competing in her fourth Games. She shares that duty with archer John Stubbs, who is the oldest member of the team at 56.

Taekwondo and badminton are the new sports making their debut at Tokyo 2020 and ParalympicsGB will have athletes contesting for medals in both. 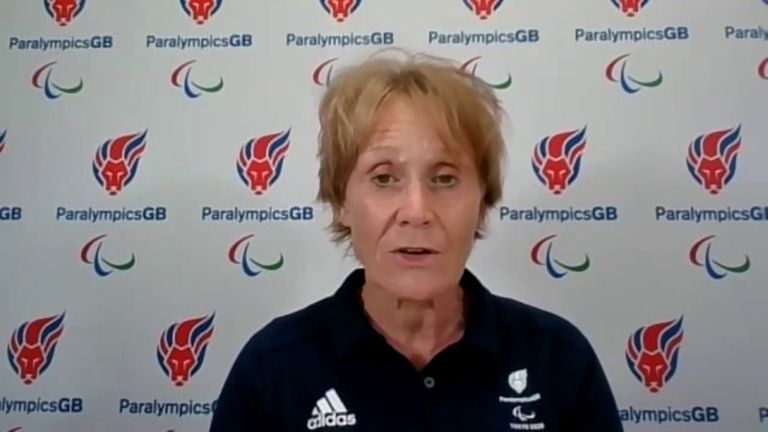 Daily infections in Tokyo have nearly tripled since the Olympics opened on July 23 and hospitals are being urged by the Japanese government to accept more COVID-19 patients to accommodate the increasing numbers.

Thirteen prefectures in Japan are now under state of emergency measures, which means there will be no spectators at any of the Paralympic events, with the exception of small groups of local schoolchildren at selected venues.

In total, 99 per cent of the ParalympicsGB squad competing in Tokyo are double vaccinated and all athletes are subject to daily testing as part of a robust set of measures to prevent an outbreak.

‘Mood in ParalympicsGB camp is extraordinary’

Penny Briscoe, ParalympicsGB’s Chef de Mission, says the mood in the camp is “extraordinary” as the athletes prepare for the delayed Tokyo 2020 Paralympic Games.

Despite this, one ParalympicsGB swimming staff member tested positive for COVID-19 last week, with two athletes required to isolate after being identified among the 11 close contacts.

All involved are “fit and well”, according to Briscoe. The athletes are residing in the Athletes’ Village with the rest of the squad but are required to stay in their rooms outside of training times, eat in their rooms, and travel to training and competition venues in separate transport.

“The close contacts have been well managed and we’ve addressed both the physical and mental health of all of those that have been impacted.

“Some of the impairments and health conditions of Paralympians does put them at greater risk. For each athlete, there was a risk assessment, especially around those athletes with high support needs or additional needs in environment.

‘Our team’s flying the flag for women at the Paralympics’

Representation and medals matter for GB couple Laurie Williams and Robyn Love as they prepare for Tokyo’s wheelchair basketball tournament.

“We are doing everything we can to protect the health and well-being of the team but also the volunteers, the workforce and the Japanese public. It’s a real team effort to keep everyone well.”

Also, Haj Bhania, ParalympicsGB men’s wheelchair basketball head coach, has not travelled to Tokyo after testing positive for COVID-19 in the lead up to the Games. Instead, he will oversee the strategic tactical direction of both the men’s and women’s squads from the UK.

Mental health became one of the defining talking points at the Olympic Games, with many athletes revealing anxieties about their mental wellbeing and some choosing to prioritise it over competition.

A 24-hour welfare hotline run by the British Athletes’ Commission which was in place for Team GB athletes competing in the Olympics will continue during the Paralympics and will offer additional support, independent of ParalympicsGB.

“The work we did in advance of the Games has been really robust and rigorous to ensure that our approach to supporting mental health is as strong as it is to that of supporting physical health and well-being,” Briscoe shared.

The heat in Japan reaches its peak in the humid months of July and August, with temperatures generally expected to be in the mid-30s with 80+ per cent humidity.

ParalympicGB’s endurance athletes, in sports such as triathlon and athletics, have been leaving nothing to chance, using heat chambers or heat tents in their gardens to try and acclimatise to the conditions before travelling out to Japan.

It’s a little bit wet out here in Japan but that’s not stopping us!! 🌧

We’re getting some great training in as a group out here, we’re all flying and can’t wait to get the main event under way!! pic.twitter.com/uDhAYILk7o

Tailored hydration systems, cooling vests and shaded tents at competition venues will be in use throughout competition to help athletes, volunteers and Games officials cope with the conditions.

Yet,despite all the preparations for heat, some GB athletes had a taste of home during their prep camp with heavy rainfall and high winds hitting Tokyo.

The International Paralympic Committee has relaxed a total ban on demonstrations at Tokyo and will allow athletes to protest during the Games in the mixed zone, during press conferences and media interviews and on social media.

However, demonstrations will not be permitted at the opening and closing ceremonies, on podiums or in the field of play.

At the Olympic Games, athletes in football, hockey and rugby sevens in particular were permitted to take the knee before kick-off as an anti-racism gesture. This would not be allowed under IPC rules and is something Briscoe hopes her athletes will respect.

“The decision was made from the weight of opinion of the para-athletes, so driven by the IPC athlete council and all global para-athletes were able to input into that process.

“So, from my perspective, we respect the approach that the IPC has taken.

“There is a right to protest, it’s just not on the podium or on the field of play, so I think our athletes are aware of those guidelines and I hope they’ll respect the athlete view.”

Wales squad: Gareth Bale 'has got the bug back' as Rob Page names 27 players for international break | Football News