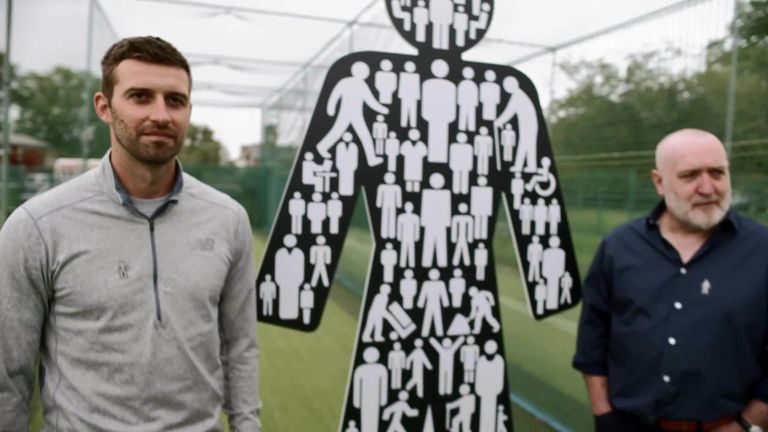 England fast bowler Mark Wood – World Cup winner and Ashes winner – and his dad Derek discuss his cricketing beginnings as Prostate Cancer UK celebrates the importance of men showing appreciation for one another.

England fast bowler Mark Wood – World Cup winner and Ashes winner – and his dad Derek discuss his cricketing beginnings as Prostate Cancer UK celebrates the importance of men showing appreciation for one another.

England fast bowler Mark Wood is a World Cup winner and Ashes winner, although neither achievement – as impressive as they are – give his dad Derek the most pride.

“For me, it’s the other occasions – where it’s a wicket that’s not going to suit you, but you run in hard and bend your back,” said Derek.

“They’re the ones where I’m most proud; that ‘never say die’ attitude, not wanting to give up.”

As part of a Sky Sports content series with Prostate Cancer UK, the father and son pair – returning to Ashington Cricket Club, where that competitive character of Mark’s was shaped – are eager to encourage men to open up talk about important subjects such as prostate cancer.

One in eight men will be diagnosed with prostate cancer, and one in four black men. “They’re shocking stats when you think about it,” said Mark.

Derek added: “Men don’t like doing that, talk about things that are too close to them, but you’ve actually got to get beyond that and have a conversation with friends or family – someone you can trust – that’s the way to beat this.”

Sadly, cricket lost one of its all-time greats, Bob Willis, to prostate cancer – which is the most common cancer in men – in December 2019, at the age of 70, resulting in the formation of the Bob Willis Fund.

Co-founded by Willis’ wife Lauren Clark and his brother David, the fund looks to support critical research into, and raise awareness of, prostate cancer. Edgbaston even turned #BlueForBob during England’s third and final ODI against Pakistan earlier this summer, with Prostate Cancer UK the main beneficiary.

“I was very sad to hear about his passing,” said Mark. “An England legend and someone who I had plenty of tapes of as a fast bowler myself – I wanted to be like him.

“It was great to see a sea of blue in the crowd [at Edgbaston] and everybody support him, because he’s such an iconic figure.

“And I had to try to replicate his bowling action to help raise funds.”

Mark is hopeful sport can be an important entry point into men having more conversations around health issues like prostate cancer.

“The important thing to check is have you had a family history of it? Guys over 50, and black men over 45 – if there’s any doubt, use Prostate Cancer UK online risk checker.”