Carmelo Anthony made two free throws with 3.1 seconds left to break a tie and cap his 17-point fourth-quarter outburst to spark the Portland Trail Blazers to a 118-114 victory over the visiting Philadelphia 76ers on Thursday night. 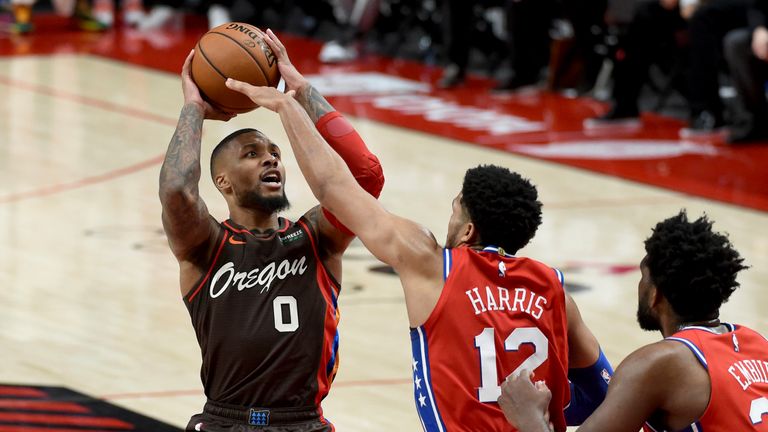 Anthony, who made his first six shots in the fourth quarter, finished with a season-best 24 points on 9-of-15 shooting as the Trail Blazers won for the fourth time in the past five games.

Joel Embiid had 35 points and nine rebounds but couldn’t prevent Philadelphia from losing for just the second time in the past eight games. Both setbacks during the stretch are to the Trail Blazers. The 76ers trailed by five late in the contest before Embiid knocked down a free-throw line jumper with 1:01 remaining and Curry drained a three-pointer with 22.1 seconds left to knot the score at 114.

After Anthony was fouled by Harris and hit the tie-breaking free throws, Robert Covington’s steal thwarted the 76ers and Lillard clinched the game by hitting two free throws with 1.4 seconds to play. Stephen Curry saved six of his game-high 40 points for a late 16-0 flurry that propelled the Golden State Warriors out of a fourth-quarter deficit and into a 111-105 victory over the Orlando Magic in San Francisco.

Curry hit 10 three-pointers and 14 of his 26 shots to pace the Warriors, who won their second straight. He also found time for eight rebounds, five assists and a game-high four steals. 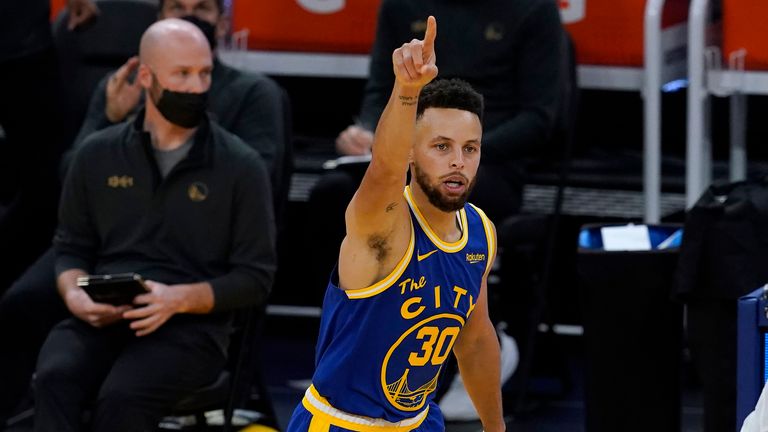 Stephen Curry dropped 40 points over the Magic, with 10 baskets from beyond the arc

Wiggins finished with 21 points for Golden State, while Oubre had 17 to go with a team-high 10 rebounds. Mychal Mulder added 11 points, and Draymond Green dished off a game-high 11 assists to complement eight points, six rebounds and two blocks.

Nikola Vucevic had 25 points, a game-high 13 rebounds and five assists for the Magic, who get a home rematch with the Warriors next Friday.

Bacon and Ross went for 20 points apiece, while Ennis had 17 points and 10 rebounds for Orlando, who lost their third straight game and seventh in their last eight. Domantas Sabonis piled up 26 points, eight rebounds and eight assists as the Indiana Pacers snapped a four-game losing streak by pulling away from the host Detroit Pistons 111-95.

Sabonis added three steals and two blocks and Malcolm Brogdon had 18 points, nine rebounds and four assists. Jeremy Lamb tossed in 17 points off the bench and Myles Turner had 14 points and eight rebounds.

Jerami Grant, who scored 32 points in each of the Pistons’ previous two games, was held to nine points on 4-for-17 shooting. 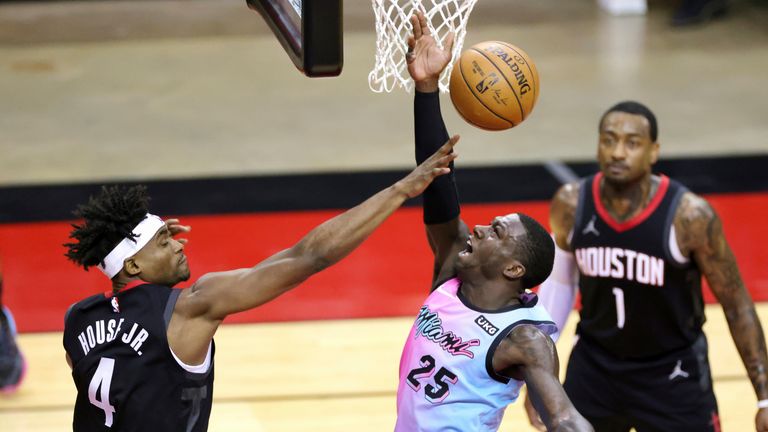 Jimmy Butler had a triple-double with 27 points, 10 rebounds and 10 assists and the Miami Heat overcame a slow start to beat the slumping Houston Rockets 101-94.

Miami won their fourth straight game and handed Houston their fourth loss in a row. The winning streak comes after the Heat lost seven of their previous eight.

Butler had his first triple-double of the season and 10th overall. The Heat came close to having two players with triple-doubles, with Bam Adebayo finishing with 10 points, 13 rebounds and eight assists before fouling out with about a minute left. Miami trailed by 13 in the first half, but used a big run and great defense in the third to take a 12-point lead into the fourth quarter. They remained up by 12 after a dunk by Adebayo before Houston used a 9-0 run to get to 97-94 with less than a minute to go.

The Heat missed two shots after that but got the rebound both times, with Butler grabbing the second one. He was fouled and made two free throws with 10 seconds to go and the Heat added two more free throws in the final seconds to secure the win.

John Wall and Eric Gordon led the Rockets with 17 points each. Semi Ojeleye had a career-high 24 points and six three-pointers as the Boston Celtics rolled to a 120-106 win over the Toronto Raptors.

The Celtics never trailed and led by as many as 19, thanks in part to a season-high 20 three-pointers.

Leading scorers Jayson Tatum and Jaylen Brown deferred to their team-mates from the outset as they drew attention from Toronto’s defenders.

Kyle Lowry led the Raptors with 24 points and six assists. Pascal Siakam finished with 23 points for Toronto, who were coming off a win at Washington a night earlier.

The Raptors played without OG Anunoby (left calf strain) for the ninth straight game but still managed to dominate in the paint, where they outscored the Celtics 58-32.

But Boston’s second unit was strong throughout and, led by Pritchard, outscored its bench counterparts 38-31.