Manny Pacquiao appeared in peak condition as he weighed in marginally lighter than Yordenis Ugas for their WBA ‘super’ welterweight title fight in Las Vegas.

The Filipino star challenges WBA champion Ugas, live on Sky Sports from 2am on Sunday morning, and Pacquiao tipped the scales at 146lbs, while the Cuban hit the welterweight limit at 147lbs.

Pacquiao has vowed to produce an explosive victory against Ugas after becoming embroiled in a heated world title dispute. 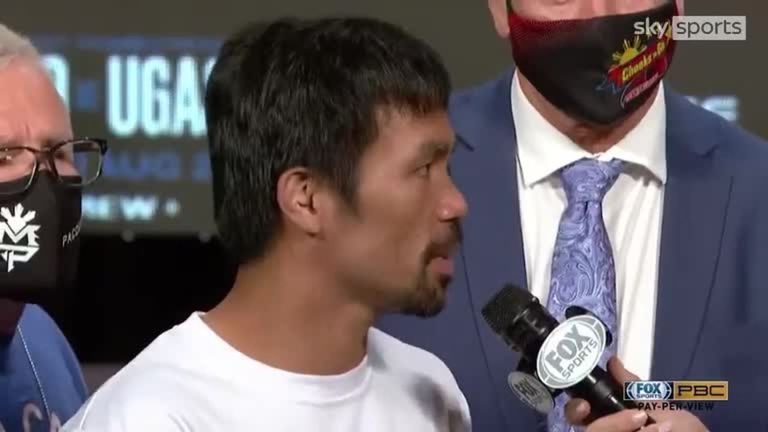 Manny Pacquiao says he’s going to put on a show during his world title fight against Yordenis Ugas.

The boxing legend had claimed the WBA title with a points win over Keith Thurman in 2019, but the governing body stripped him of the belt due to inactivity and elevated Ugas to ‘super’ champion.

“Of course I don’t want to be over confident for this fight, but I want to make sure that tomorrow night, we’re going to have the victory and the fans will be happy.

“Tomorrow night I will do my best. I’ll give my best to the fans and of course for my country. This fight will be dedicated to the Philippine people.”

But Ugas is attempting to pull off a stunning upset victory, which could force the 42-year-old Pacquiao to reconsider his future in the sport.

“Being in the ring with a legend like Manny Pacquiao, I have a lot of respect for him, so I’m very excited,” said Ugas.

“But all respect is finished after we get in the ring tomorrow.

“I’m definitely very emotional and very excited for this opportunity, and I have the belt.

“Whoever wins tomorrow, gets the belt, but right now I’m the champion and I’m ready.”

Watch Manny Pacquiao vs Yordenis Ugas, from 2am on Sunday morning live on Sky Sports.

Vietnam’s V.League cancelled due to Covid-19