It’s Game 6 of the 2019 NBA Finals and the Golden State Warriors find themselves up by a point with just over three minutes left in the third.

They must win to stave off elimination, as they did in Game 5, despite losing Kevin Durant to a devastating Achilles tear in the second quarter.

Meanwhile the Toronto Raptors are up 3-2 in the series and just one win away from the franchise’s first title. With Durant now out of the Finals, they smell blood.

Klay Thompson, on 25 points for the night already and yet somehow left wide open by the Raptors defense, takes an easy pass from Draymond Green and swishes a three from just a step beyond the arc. 28 for Klay, 83-79 advantage to Golden State.

A few possessions later, Kyle Lowry loses both his dribble after being swarmed by DeMarcus Cousins and Green. Steph Curry steals the loose ball, races up the floor and finds his backcourt partner Thompson driving to the hoop. The shooting guard is fouled by Danny Green on the dunk attempt and goes down hard on one leg.

Right then and there, with Thompson clutching his left knee in agony, the Warriors’ title chances were over and done in an instant.

He was carried to the locker room by teammates but returned, limping, to a raucous reception from the Oracle Arena to swish both free throws and give the Warriors a five-point lead they would ultimately relinquish without him, along with the Larry O’Brien Championship trophy.

That was the last time we saw Klay Thompson on the floor during an NBA game.

To that point he had made 122 appearances in the playoffs, missing only one game. He had also played in 615 of 640 regular season fixtures across eight seasons. But that ACL tear was compounded by a right Achilles injury (the same as Durant) that occurred just before the 20-21 season and following 17 months of rehabilitation, ruling Thompson out last year, too.

While the Warriors aren’t going to rush him back by any means, a Christmas Day return is being rumoured for the man with the sweetest shooting stroke in the league. That, truly, would be the very best gift for all NBA fans. As his head coach Steve Kerr puts it: “The light is finally at the end of the tunnel.”

Footage has already circulated of Thompson draining 10 straight corner threes in a gruelling workout drill, reminding everyone – if they needed reminding – that one of the greatest shooters in the history of the sport has two seasons worth of missed three-point bombs to catch up on.

Even despite all the time missed, 806 days at the moment of writing, expectations are high. Part of the reason for this has been his former teammate Durant’s blistering return to NBA basketball after his own spell out with an identical injury. Durant waited 552 days before appearing in a pre-season game against the Washington Wizards on December 13 last year. He made his proper debut nine days later, scoring 22 to help Brooklyn rout – who else – the Warriors by 26 points.

Although there were other niggles this past season, including a hamstring injury that saw the 2014 MVP miss almost the entirety of February and March, Durant’s return was a wholly triumphant one. His performances throughout the playoffs, when it really matters, were nothing short of staggering. 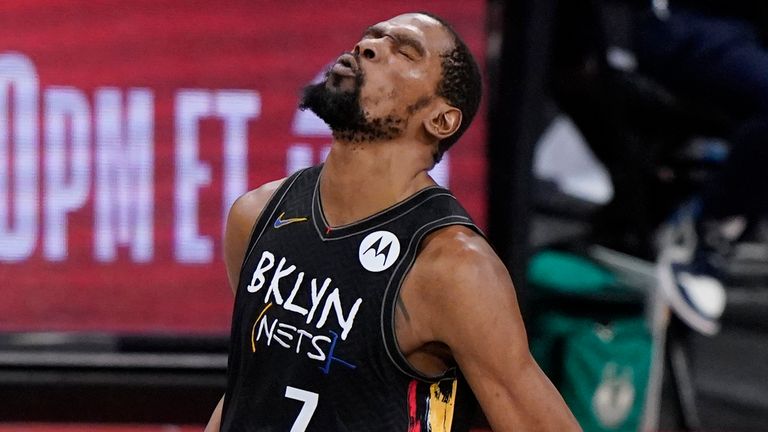 Kevin Durant scores 49 points, 10 assists and 17 rebounds in the Brooklyn Nets’ Game 5 victory over the Milwaukee Bucks in their NBA playoff semi-final.

‘KD’ averaged 34 points, nine rebounds and four assists across 12 games during the post-season while shooting 40 per cent from deep, 87 per cent from the charity stripe and 51 per cent from the floor. And who could forget his bravura 49/17/10 game against the Milwaukee Bucks in the conference semi-finals, staving off elimination with one of the finest individual displays the playoffs has ever seen?

As if to prove that wasn’t a fluke, he did it again with 48 points in Game 7, the most ever, even as the Bucks held on in overtime. Had his clutch two-pointer at the end of regulation been an inch or two further back we might even be referring to him as a three-time champion and Finals MVP.

Instead, Durant took that heartbreak to Tokyo and dominated for Team USA, becoming their men’s all-time leading points scorer at the Olympics and earning his third gold medal.

It is no exaggeration to say that, at points, he carried Gregg Popovich’s star-packed roster entirely on his own. 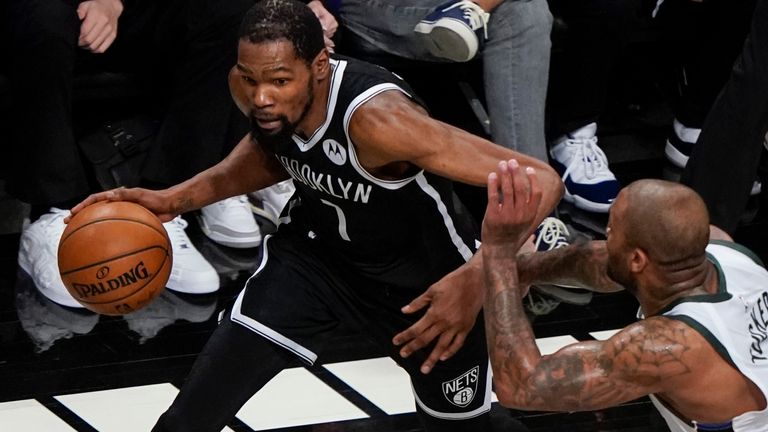 Kevin Durant set a Game 7 record with 48 points, including a buzzer-beater with a second left to send the game to overtime, but it was not enough as the Nets fell short against the Bucks.

An Achilles tear is widely considered the most devastating injury an NBA player can sustain. It has sabotaged playing careers and often ended them entirely. The injury forced Elgin Baylor and Isiah Thomas into premature retirements and hampered the final years of Patrick Ewing and Kobe Bryant in the league. Talent makes no difference.

More recently, it has completely derailed All-Star performers such as Elton Brand, John Wall, DeMarcus Cousins as well as role players like Rudy Gay and Wesley Matthews, none of whom have been able to recapture anywhere near the same level they showed before the injury.

Of 18 players who suffered major Achilles injuries between 1988 and 2011, seven of them never returned to play in the NBA. According to a report published in the Orthopaedic Journal of Sports Medicine, analysing 47 players who suffered Achilles tears between 1970 and 2019, those who returned had shorter careers and decreased performance relative to how they played before the injury.

Typically, this was a 20 to 40 percent decrease in productivity in their first season back, with an overall return to between 80 and 85 percent of their pre-injury level. Fewer minutes are averaged, while field goal and three-point percentages also plummet.

At the elite level, that 10 to 15 percent might well be the difference between a max contract and a veteran minimum. In the history of the league, it is only Dominique Wilkins and now Durant who have managed to return to their peak levels after tearing their Achilles.

This means expectations for Thompson should still be tempered, even if, as his former teammate has shown, there is plenty of cause for optimism.

That being said, Thompson’s biggest asset – his instantaneous snap-release jumper – will have been largely unaffected. Whatever kind of impact the injury might have had on him physically, you can rest assured he is still likely going to drain well over 40 per cent of his three-point attempts and score 15 to 20 points a night – as he has done through the entirety of his career to date.

Shooters shoot, and given the ice-cool demeanour Thompson showed throughout those three championship runs in ’15, ’17 and ’18, you can expect him to start lighting it up once again.

Like Durant, it seems that simply having the mentality to let it fly and trust in your shot after so long out, and such an arduous recovery process, is part of the battle.

There may, however, be some drop-off on the defensive end, where Thompson was always one of the most effective and versatile guards in the league, even earning All-Defensive Second Team honours in 2019. This is where any physical toll is likely to show up. In the past, Thompson (6 foot 6) could stay in front of any star guard or wing opposition teams could throw at him, as well as switch effortlessly through 1 to 4. His endless stamina was vital, too, whether chasing down opponents or freeing himself from their grasp by curling around screens.

These are things that will take some time to come back as he gets back up to speed with competitive basketball after two seasons out. The magic jump shot will be there from the get-go. The truth is, however Thompson comes back, we should all just be grateful we get to watch it again at all.