John Kiely feels that his Limerick team are still improving following their 3-32 to 1-22 All-Ireland final win over Cork. Meanwhile, Kieran Kingston says this Rebels outfit will win a Liam MacCarthy Cup title in the future. 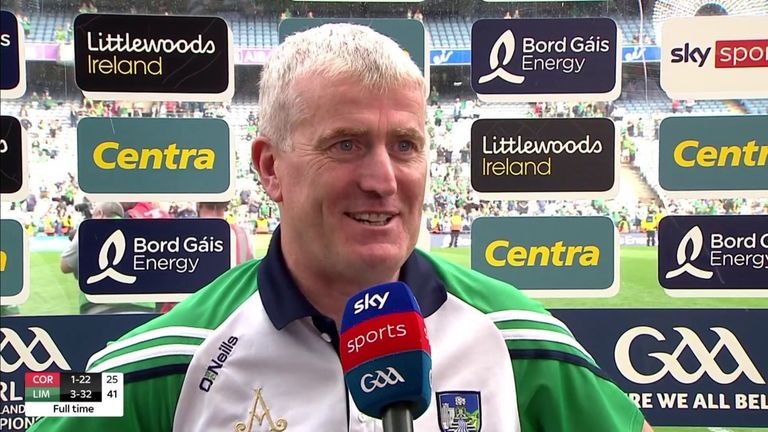 John Kiely could not hide his delight at full-time.

After leading Limerick to a third All-Ireland title in four years, he has steered the county to new heights.

Limerick put in a stunning display, amassing 3-32 in a dominant victory.

“Incredible. It’s hard to believe it,” he told Sky Sports.

“We’ve been building all season towards today, and our performances have been incrementally improving as we have been coming along, and we’ve been getting stronger and stronger. I’m delighted that the lads, the work they put in over the last four months has been rewarded with a performance like that today.”

And after a difficult two seasons, Kiely feels his charges are still improving: “It has been a difficult time. We’ve got great trust and great belief in this group. And I still think they’re very much on an upward curve. That’s where these boys are at, and this is a just reward for where they’re at, at the moment as a team.

“This group is very focused on the here and now, and each game as it comes along. What lies ahead for them isn’t really a consideration at the moment. It was all about this season and maximising what we could do.

“We came into this season as champions. In 2019, we got as far as the semi-final and didn’t quite find the performance across the 75 minutes against Kilkenny. This year we managed to carry the tag much, much better. We coped with it much better. And it’s a great reflection on the work that Caroline [Currid] has done with the players.” “Tremendous pride and tremendous enjoyment,” he continued. “We put a huge value on that enjoyment aspect of what we do in our training and our matchdays. We’re a very united bunch and we look after each other. We all fall from time to time, but we get up again and we stick together. As long as we stick together, we’ll give ourselves opportunities. And that’s all we can do, is give ourselves chances along the way.”

Kingston: Limerick were on another level

Cork manager Kieran Kingston was full of praise for the victors.

“Today is always about Limerick. We were playing a team that is very unlucky not to have four All-Irelands in a row now. We knew that coming up. I said it before the game, this is an exceptional team,” the Tracton man outlined.

“We said we would focus on our own game, focus on what we do best. It’s got us to the final. But today we were up against a team at another level.

“They were awesome today. It was like trying to stop the tide with a bucket.” 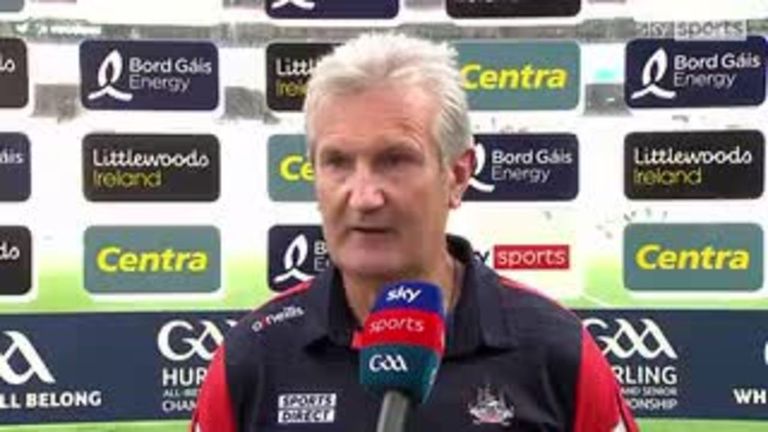 But does he feel there is hope this Cork team can win an All-Ireland?

“I think there is,” he said. “I believe in them. They’re a great bunch of lads. I said it after the semi-final. They’re really honest. Today was a big lesson for them.

“We’ve got to take it on the chin. When these guys are successful, days like today will stick in the memory. When eventually they get there, it will be sweeter. But today is a chastening experience for a young team, and it’s just about how they rebound from it now.

“The minors won last night for the first time in 20 years. Noel [Furlong] and his team, Pat Ryan’s team have won the last two [U20] All-Irelands, and we hadn’t won it in 22 years. The seniors getting to the final, obviously only the second time in 16 years, it’s progress.

“But it’s not good enough. Until such a time as we perform and win at this level, it’s then really that Cork are back. Underage titles are fantastic, but it’s when the seniors are performing up here and winning titles up here [in Croke Park], it’s then you know, yeah, Cork are back.”