Front row Grant Millington, who has been with Castleford since 2012, will retire at the end of the season and return to Australia; “There would be no better way to finish than with what we all play for, that major trophy,” he said

When Grant Millington was sleeping on the floor of team-mate Ryan McGoldrick’s friend’s home during the first month of his spell with Castleford Tigers, little did he imagine he would end up spending 10 seasons in West Yorkshire.

Those days of November 2011 seem like a lifetime ago for the prop, who has become one of the mainstays of the team during Castleford’s rise from battling against relegation in Super League to genuine contenders for major honours, holding the club record for most appearances by an overseas player.

The 34-year-old will finally call time on what was initially meant to be a two-year stint with the Tigers at the end of this season after announcing his retirement from professional rugby league on Friday, and has seen plenty of positive change on and off the field at Cas in that time.

“I was sleeping on the floor for a month in pre-season thinking: ‘What have I done? I’ve turned up to a professional club and this is the way it is?’,” Millington said. “But the club has progressed so far on and off the pitch it’s been easy to stay.

“The club has gone from strength to strength off the pitch and they’re still building, and I honestly believe this club can be something special.

“On the pitch, the change is dramatic as well. When I first landed, the fans were happy if we beat Wakefield and Leeds, and in every other game if we had a good dig and didn’t get beaten by more than 20 or 30, they were happy.

“Now, we’re pushing, and we want to be a top side. While we’ve not won a major trophy yet, I honestly don’t think the club are far from it.”

Millington admitted it had been a tough decision to hang up his boots, having held preliminary discussions with the Tigers about staying on for another season and feeling settled in Castleford with his wife, Amy.

The Millingtons have become so settled in the area over the past decade that not only did they take out British citizenship, but all three of their children were born in nearby Wakefield. However, their desire to spend more time with their extended family in Sydney played a big role in this decision.

The forward has played a big role in the Tigers’ community work too, something which was embedded in him during his previous spells in the NRL with Cronulla Sharks and Canterbury Bulldogs, winning the club’s community player of the year award in 2019 for his efforts.

“Especially at a club like Cas where the town just thrives off the rugby, it makes a great difference getting out there and doing things in the community and helping people and doing whatever you can to push the Tigers name and help people,” Millington said. 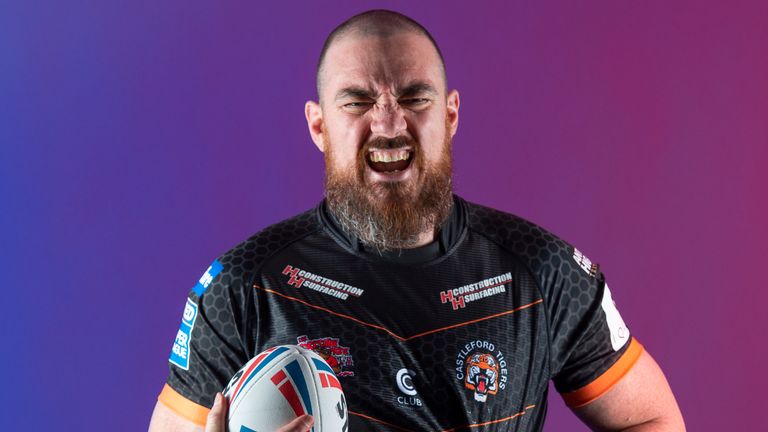 When I first landed, the fans were happy if we beat Wakefield and Leeds, and in every other game if we had a good dig and didn’t get beaten by more than 20 or 30, they were happy. Now, we’re pushing, and we want to be a top side.

“There are so many skills you learn in rugby league which are transferable into the real world. You put 30 blokes in a room and you’ve got to be able to deal with different types of personalities, and conflicts might arise and all sorts of stuff.

“As you get older and get used to dealing with different types of people, you get better in the community and definitely with the situations you’re put in which are awkward situations.

“We’ve done a lot of work with the Prince of Wales Hospice which is such a fantastic organisation. Especially the local ones in Pontefract, you get Cas fans through there and they’re obviously not well, but just to see some people’s faces light up to meet you is a special moment.”

Given his desire to help others, it is perhaps no surprise Millington has ambitions of moving into coaching when he returns to Australia as well, although he intends to keep playing at semi-professional level for a couple more seasons too.

Powell at 500: Wells and McDermott on the Castleford head coach

Jon Wells and Barrie McDermott discuss what makes Daryl Powell a stand-out coach after passing 500 games for his career.

Whether his coaching journey takes him back into the professional game or not, some of the lessons learnt from Castleford head coach Daryl Powell – also moving on at the end of the season to join Warrington Wolves – since he took charge in 2013 will stand him in good stead.

“I came here as an average NRL player and, I’ll be honest, in my first season here I was an average Super League player,” Millington said.

“Then Powelly took over and he’s got a knack of understanding what skillset you’ve got and putting you in the game and in positions to get the most out of you.

“As you get to the back end of your career, you sit in meetings and don’t just think about what you’re coming up against on the weekend or what you’re being shown on video. You watch how Powelly handles people and different personalities and different situations, and I’ll take a lot out of his book.”

The memories of winning the League Leaders’ Shield and the Tigers’ run to the Grand Final in 2017, plus this year’s Challenge Cup final appearance are among the highlights of Millington’s time at the Mend-A-Hose Jungle.

However, there is still the chance to finish with a long-sought major trophy as Castleford remain in contention for this year’s play-offs and Millington would enjoy nothing more than crowning his near-decade at the club by lifting the Super League title at Old Trafford on October 9.

“It would be an insane ending,” Millington said. “Don’t get me wrong, we’re under no illusion of how tough it’s going to be to get there, and every week is finals rugby for us.

“If we get to the finals, I think we’ve got a good chance of doing it and there would be no better way to finish than with what we all play for, that major trophy.”