Tee times were brought forward due to the threat of thunderstorms on the final day; American Johannes Veerman posted a final-round 68 to claim a two-shot victory over Sean Crocker and Tapio Pulkkanen. 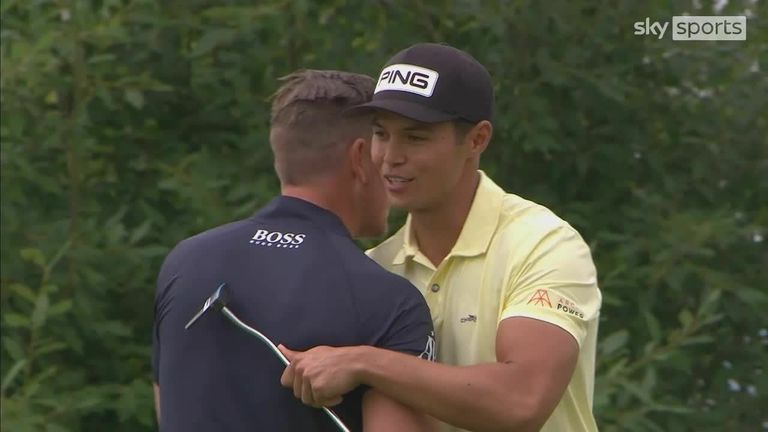 A look at the best of the action from the final round of the D+D Real Czech Masters at the Albatross Golf Resort, near Prague.

A look at the best of the action from the final round of the D+D Real Czech Masters at the Albatross Golf Resort, near Prague.

Johannes Veerman became the latest first-time winner on the European Tour after securing a dramatic victory at the D+D Real Czech Masters.

The American mixed six birdies with two bogeys on his way to a final-round 68 at Albatross Golf Resort, seeing him end the week on 15 under and two clear of Sean Crocker and overnight leader Tapio Pulkkanen.

Pulkkanen was top of the leaderboard until he dropped three shots over his final two holes to close a level-par 72 and slip into tied-second, with Henrik Stenson three off the pace in a share of fourth alongside Paul Peterson.

“It’s unbelievable,” Veerman said. “I played with two great players today, both of them played really well the whole way. At one point there was three of four of us all tied for the lead, but I stuck to my game and I can’t believe that I won.”

Veerman started in the group two off the pace and slipped further behind with a bogey at the second, having seen Pulkkanen open with a birdie, before both players picked up a shot at the par-four fourth.

A birdie at the sixth was followed by back-to-back gains around the turn to temporarily move Veerman ahead of Pulkkanen, who made three-putt bogeys at the eighth and tenth, only for Veerman to miss a seven-footer to save par at the 11th.

Both players took advantage of the par-five next and remained tied for the lead until Pulkkanen birdied the 15th, with the pair then both picking up shots at the par-three 16th – where playing partner Stenson found water off the tee on his way to a double-bogey – to pull clear of the field.

Pulkkanen bogeyed the 17th after a wayward tee shot to leave the pair tied again heading to the par-four last, where the Finn sent his approach into the water – resulting in a double-bogey six – and allowed Veerman to secure his win with a two-putt par.

Crocker made four straight birdies around the turn to help him to a second successive 70 and join Pulkkanen on 13 under, while Peterson carded his only bogey of the day at the par-four last to drop alongside Stenson in tied-fourth.