GB&I won two of the morning foursomes matches and halved the other before picking up two more wins in the afternoon fourballs to end the day 4.5-1.5 ahead – watch the Curtis Cup live on the Sky Sports Golf YouTube channel. 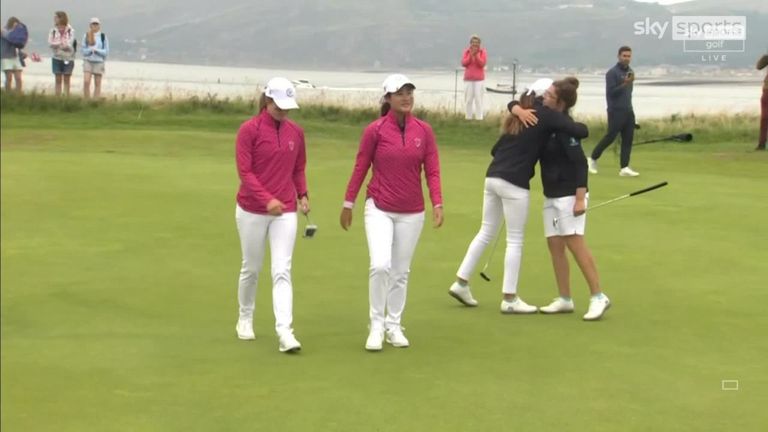 A look back at the best of the action from the opening morning of the 2021 Curtis Cup, where Team GB&Ire made an encouraging start against Team USA

A look back at the best of the action from the opening morning of the 2021 Curtis Cup, where Team GB&Ire made an encouraging start against Team USA

Great Britain and Ireland dominated the opening day to move into a three-point lead after the first day of the 42nd Curtis Cup.

The hosts, who were thrashed 17-3 by Team USA in 2018 contest, went unbeaten in the morning foursomes matches before winning two of the three fixtures in the fourballs to open up a 4.5-1.5 lead at Conwy Golf Club.

It took a final-hole birdie from the world’s top two, Rose Zhang and Rachel Heck, to claim a share of the spoils against Scottish pair Louise Duncan and Hannah Darling in the opening match and prevent a clean sweep for the home side in the foursomes.

Annabell Fuller and Charlotte Heath led from the opening hole on their way to a 4&3 victory over Rachel Kuehn and Emilia Migliaccio, while Caley McGinty and Emily Toy won three of their opening five holes to help them see off Gina Kim and Brooke Matthews 3&1.

GB&Ire extended their advantage early in the fourballs when Darling and Fuller birdied their final hole to claim a 1up win over Heck and Migliaccio, before McGinty and Lauren Walsh defeated Kim and Jensen Castle 2&1.

The United States secured their only win in the final match of the day, with Zhang and Allisen Corpuz coming back from two down with five holes to play to beat Toy and Annabel Wilson.

The contest is a three-day competition, with another three foursomes and three fourball matches taking place on Friday ahead of Saturday’s final-day singles. GB&Ire are chasing a third straight victory in the biennial contest.